More than 12,000 Syrian refugees are in need of potable water in the “Al-Rukban” camp, and the camp is under siege by the regime forces, which prevent the entry of food and medical medicines.
With the increase in temperatures and the decrease in drinking water, the suffering of the residents of the “Rukban” camp on the Syrian-Jordanian border increases, after the concerned authorities and those responsible for the camp reduced the quantities of water coming from Jordan to the camp last May.
Al-Rukban camp was established in 2014, and most of its residents hail from the countryside of Raqqa, Deir ez-Zor, Homs and Hama, and more than 12,000 refugees from several Syrian regions live in it.

The activities of the World Breastfeeding Week 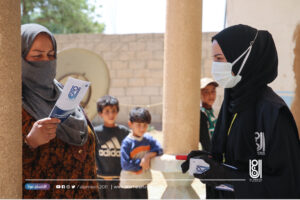