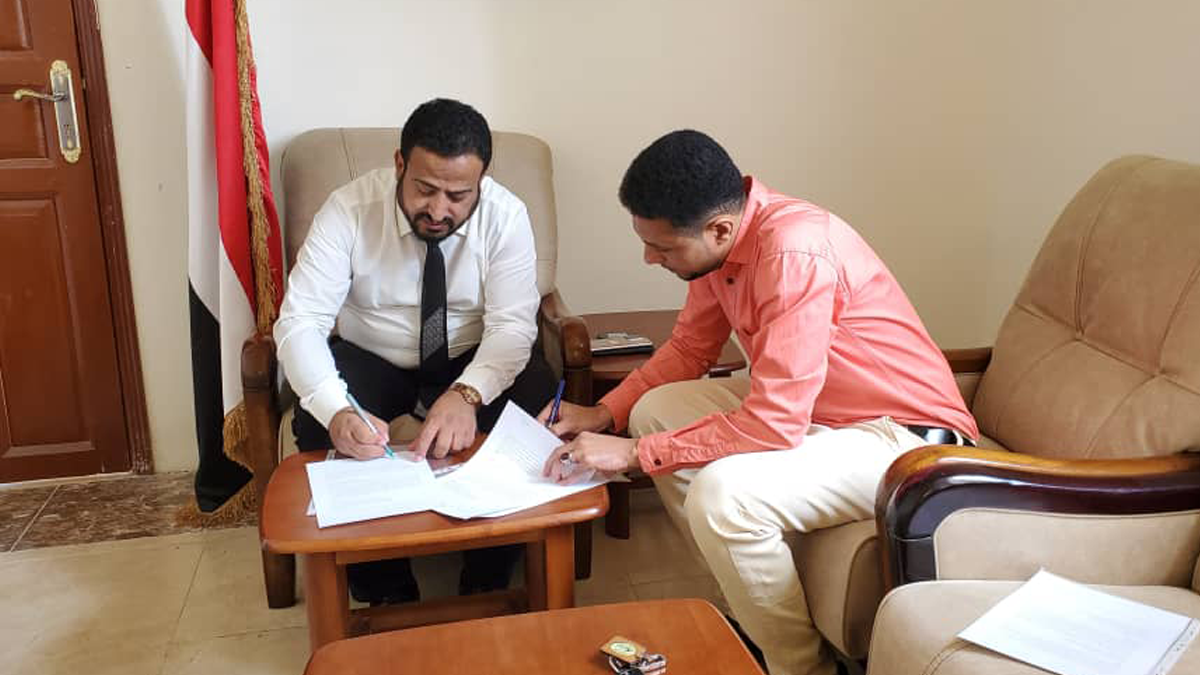 The Health Office signs a memorandum of understanding with the International Association “Al-Ameen” in Marib governorate.

On the eve of the tenth anniversary of Al-Ameen for Humanitarian Support, Al-Ameen continues to write a track record of achievements. Yesterday, September 4th, Al-Ameen signed a memorandum of understanding to provide medical and treatment services to displaced and the host community in the Yemeni governorate of Marib, between the ” General Director of the Health Office in Marib governorate Dr. Abdulaziz Al-Shaddai, and the Director of INTERNATIONAL WARS AND DISASTERS VICTIMS’ PROTECTION ASSOCIATION- Al-Ameen in Marib Dr. Ashraf Salem Bahamran.
The memorandum includes the operation of the health unit in the Jufna camp for displaced persons, which has already been implemented by the organization, and providing it with medical cadres and medicines, to provide primary health care and follow-up cases for malnutrition to 22,500 displaced people from the camp, which hosts the largest concentration of displaced people in the Republic with more than 200,000 displaced people.
The memorandum of understanding also includes the provision of medicines for chronic diseases to the Health Office, which Marib Governorate suffers from shortages due to an increase in the number of patients, which will be distributed several hospitals and health facilities in the governorate.
On the International Day of Philanthropy Where did we get after ten years?
On the International Day of Philanthropy, which falls on the fifth of September every year, we recall with you ten years that have passed since the first anniversary of Al-Ameen for Humanitarian Support, ten years in which we have accomplished thousands of charitable works, we have made thousands of stories and told them as inspiring success stories for other people who have been influenced and joined us to be with humanity in Syria, Lebanon, Yemen, Turkey, Sudan, Somalia, Palestine, and other countries. With one slogan, they see themselves through it, where the circumstances, the days, and the work have gathered them as well, and they always said one voice, For Man’s Help.
Another concept of humanity.
Ten years ago, during which we embodied another concept of volunteerism, humanity, and charity. It was an opportunity to strengthen social bonds and contribute to creating more inclusive and resilient societies. Philanthropy was able to lift the effects of damage on humanitarian crises, it also could support public services in the fields of medical care, education, housing, and child protection. Philanthropy is very effective in improving culture, science, sport, and protecting cultural heritage, as well as promoting the rights of the marginalized and spreading the humanitarian message in conflict situations.
Continuing indefinitely
It’s a ten-green harvest, ten of the good and giving to the needy, the affected, and the most vulnerable families, Being with them in all circumstances, under the heat of the sun in the summer, above the frost of the water in the winter, under a barrage of rockets and indiscriminate shelling, we received the displaced in our homes, we carried the trust over all those years that passed, we stood with the needy when we heard his voice, and the bereaved when we heard their moans, and today we reaffirm that we continue to give unlimited humanity. 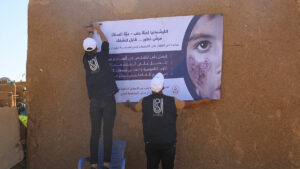 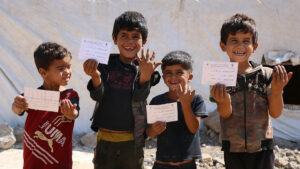 Vaccination campaign for measles and rubella in northern Syria

Training course for team supervisors in the measles campaign